On the 11th of September in the year 2001, American Airlines Flight 11 and United Airlines Flight 175 took off from the airfield of Logan International Airport near Boston. Only a few hours later, the two Boing 767 aircrafts would alter the skyline of New York City in devastating fashion, and the politics of the United States of America on potential terroristic threats for the unforeseeable future. Possibly forever. As the two planes crashed into the North and South Tower of the World Trade Center, killing thousands of people in the process, and hundreds of first responders in the aftermath, America was shaken to its foundations. After the smoke had settled, the debris had fallen, and buildings had collapsed in on themselves, no efforts were made to rebuild the towers. But what the administration of President George W. Bush did build upon the rubble, was something Amnesty International would later call “a major breach of human rights”: The Guantánamo Bay detention camp.

“An optimal setting”
Secretary of Defense Donald Rumsfeld stated that the prison camp was established to detain “extraordinarily dangerous people”, to interrogate detainees in “an optimal setting”, and “to prosecute detainees for war crimes”. The administration was hoping for quick and “positive” results in the years to come. But what transpired afterwards was mostly outrage in response to the various accounts of major violations of basic human rights conducted within the walls of Camp Delta, Omega and the various others. “Indefinite detention without trial, abuse and torture” are just a few words to quickly summarize what echoed out of the facilities located on the Cuban coast, on territory which the Cuban Government has stated to have been „obtained by threat of force and in violation of international law“.

The question arose how something like this was possible, and whether Guantánamo Bay and the treatment of its detainees was violating the treaties of the Geneva Conventions or not. In response, President Bush declared that “none of the provisions of Geneva apply to our conflict with al-Qaeda in Afghanistan or elsewhere through the world.” Additionally, he determined that “the Taliban detainees are unlawful combatants” and “because Geneva does not apply to our conflict with al-Qaeda, al-Qaeda detainees also do not qualify as prisoners of war.” Before the opening of the detention camp, Bush’s political appointees at the U.S. Office of Legal Counsel came to the conclusion that the Guantánamo Bay detention camp could be considered to lay outside of the U.S. legal jurisdiction, due to it being located in the sovereign territory of Cuba and therefore beyond the federal areas of the USA, as they were declared in the Federal Report of 1962.

Unlawfully detained
“Terrorists who once occupied Afghanistan now occupy cells at Guantánamo Bay” is what George W. Bush said during his 2002 State of the Union Address. The fact, that many of those detained at Guantánamo bay were only suspected of having loose ties to individuals of terrorist networks, with no concrete evidence to justify the allegations, was omitted. In 2019, Amnesty International branded Guantánamo Bay as a “stain on the human rights” record of the United States of America, in light of the bitter truth reverberating from statements of former detainees that human beings had to endure inhumane treatment such as torture, sexual degradation, forced drugging and religious persecution. All while being considered “guilty unless proven innocent” without much hope for an official hearing or trial.

Many of those who were transferred or who were actually discharged are seeking legal action, which proves to be difficult due to the classified nature of many of the events at the Guantánamo Bay detention camp. Some of the former detainees are trying to have their voices heard, calling for the facility to be finally shut down, something that had been promised in the past. Some of them, like Mohamedou Ould Slahi, who had to wait for six years after he was officially ordered to be released, and who returned to his homeland of Mauritania after having spent a total of 14 years in the U.S. military prison without ever being charged, want to share their story and give first-hand accounts of what happened. 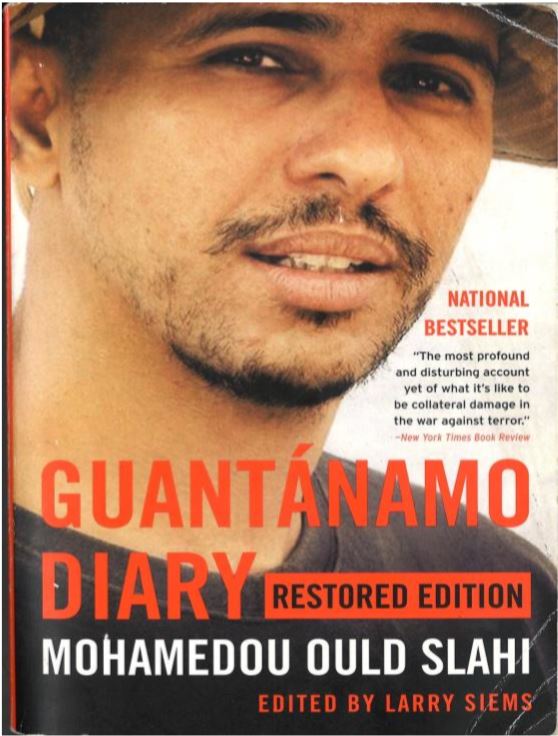 Through the efforts of Dr. Don E. Walicek, Professor from the University of Puerto Rico and a Visiting Fulbright Professor of Cultural Studies, who is currently holding the course ‘The Humanities Respond: Ethics, Justice, and Hope at Guantánamo Bay’, an event will be held to discuss the memoir of Mohamedou Ould Slahi, the only one penned behind the bars. The focus will be on the restored version of his first book, something he had deemed necessary, after his first version had been heavily redacted by U.S. government censors, with individual words as well as lengthy passages blocked out by daunting black bars, leaving him with something he later called “a broken text.”
Despite the promises of Mauritania’s state security, Slahi is yet to receive his passport and cannot travel internationally. For this reason, he will participate in this activity via Skype. Those who attend this event will have the opportunity to ask Mohamedou Ould Slahi questions about his writings and related experiences. In addition, University of Graz students who are enrolled in the course ‘The Humanities Respond: Ethics, Justice, and Hope at Guantánamo Bay’ will read from Slahi’s works.